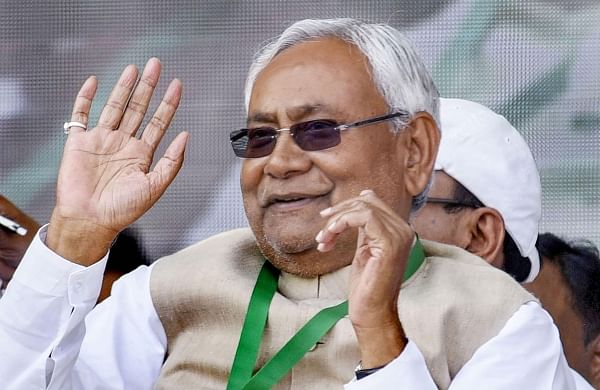 PATNA: Amid the high alert sounded against the possibility of heavy rains with lightning strikes, Bihar Chief Minister Nitish Kumar has an appeal to the people of the state to follow the advisory issued by the state disaster management department for safety during the lightning.

Kumar asked people to remain at safe places whenever rain coupled with thunderstorm occurs and maintain the safety tips provided in the advisory.

The state has cautioned the people of heavy rains for the next few days with the possibility of lightning.

Bihar has witnessed 88 death, including dozens of farmers and labourers who were killed by lightning in 23 Bihar districts since Thursday.

The highest number of 13 deaths due to the lightning have been reported from different parts of Gopalganj district alone followed by eight deaths each from Madhubani and Nawada, six from Bhagalpur, five each from East Champaran, Darbhanga, Banka and the rest from other districts of the state.

People killed in the lightning strikes were mainly farmers or seasonal labourers in all the 23 districts.

All the deceased were working in the paddy fields when the lightning struck on them during heavy rains coupled with thunderstorms.

Altogether eight persons including a farmer-couple were killed in Madhubani district’s Fulpras and other areas working in the paddy fields on Thursday.

After Madhubani, Nawada district had reported the same number of eight deaths while six deaths were reported from Hussianganj block of Siwan district.

Confirming the deaths of 83 persons due to lightning, principal secretary of State Disaster Management, Pratyay Amrit said that officials of concerned districts were taking the details and providing whatever assistance is given by the state government accordingly.

The deaths were also reported from Banka, Bhagalpur, Khagaria, Madhubani, West Champaran, Samastipur, Sheohar, Kishanganj, Saran and Jehanabad in addition to Gopalganj, Siwan, Sitamarhi, Aurangabad and Madhepura. Sources said that dozens of other people were injured by lightning in Bihar on Thursday.

The deaths due to lightning take place every year in Bihar. The state is sixth terms of reporting maximum of lightning strikes in the country with an average of 100 or more deaths every year.

When asked about the steps taken to prevent such disasterous occurrences, Pratay Amrit, principal secretary of disaster management department, said that lightning alert systems have been installed in many lightning prone districts, including Gaya, to alert about the possibility of lightning 20 to 40 minutes in advance. The alert SMS messages are sent on the cellphone numbers of around 3.5 crores of users here.